Grease compatibility and lubrication in commercial, industrial and automotive sectors is now more important than ever and most maintenance teams endeavour to create a consistent and reliable procedure. Using the same or similar products day in day out can help with this.

Engine and gearbox oil are in most cases easy to change, if this is not possible the compatibility of the fluids can be quite easily determined.

In applications where grease compatibility is the concern then removing all of the original grease is not as easy and sometimes impossible. The best advise from most suppliers is to purge as much grease through the system when changing to help displace the old grease.

However, this is not always essential if both greases being used are compatible with each other. 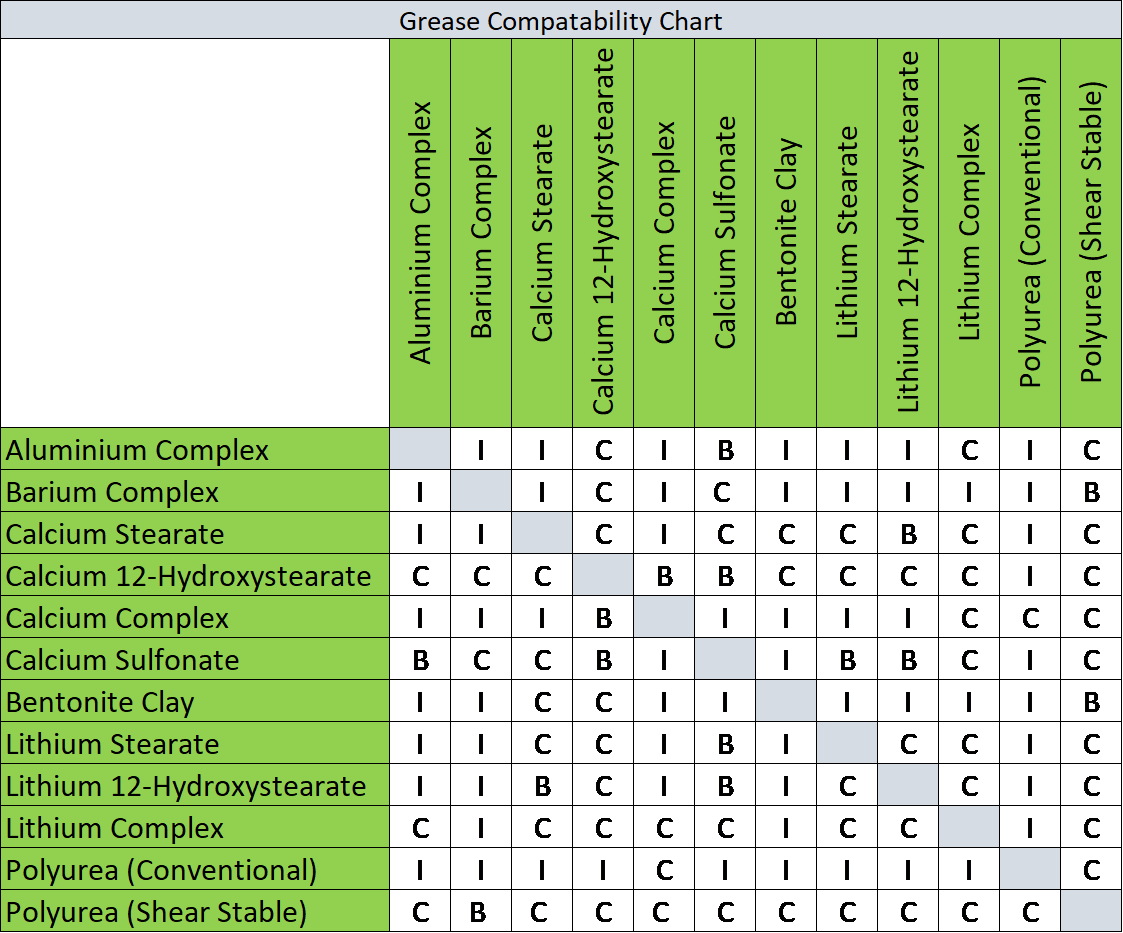 B = Borderline, C = Compatible, I = Incompatible

Note: This chart is a general guide to grease compatibility. Specific properties of greases can dictate suitability for use. Testing should be conducted to determine if greases are compatible. Clay based grease was not particularly good when mixed with Lithium and Calcium soap-based greases. The issue of grease compatibility has now become more complex than ever with the introduction of complex soaps,polyurea, calcium sulfonate and even more exotic thickeners used in many greases.

Grease compatibility mixtures are typically categorised in the following way:

To make matters more confusing, there are some grease specifications that are based only on grease performance without regard to grease configuration.

If greases of different thickener types (both of which meet the performance requirements of the specification) get mixed in a service, significant consequences could result.

The compatibility of polyurea greases with soap-thickened greases is probably the most debated area of grease compatibility today. Grease based on simple lithium soaps (lithium stearate or lithium 12-hydroxystearate) and lithium complex soaps (containing simple soap and a complexing agent, such as lithium azelate) may not be compatible with polyurea greases. If necessary, compatibility testing on combinations of these greases can be done to determine whether the greases can be mixed in service or not. It is imperative of the user of the greases to verify compatibility when making a change of grease from one product to another. Most grease suppliers have data on certain grease combinations or are willing to perform the required testing for their customers.

To help users understand the implications of mixing greases, ASTM International (formerly the American Society for Testing and Materials) Committee D02.G developed ASTM D6185 Standard Practice for Evaluating Compatibility of Binary Mixtures of Lubricating Greases in 1997. This document details the procedure for evaluating the basic compatibility of greases, which is determined by measuring the dropping point, the mechanical stability and the change in consistency of the mixture upon heating.

Greases are considered to be compatible if the following conditions are met:

The tests that are conducted should be settled upon between the user and grease supplier to assure that the properties that are critical to the proper function of the product in service are covered. The full description of ASTM D6185 is available from ASTM International at www.astm.org

Consequences of mixing the wrong greases

If anyone where to mix 2 or more incompatible greases then the consequences could be dire. The greases may react to one another and cause the base oils to separate or the thickener oils could also separate, if this happens the base oils can’t stay in the same place for long and can get messy causing oil to ooze or the lubricant to run out of the area it was applied. Once this starts to happen parts such as bearings and other mechanical moving parts will start to wear prematurely and cause big problems later down the line.

Selecting the appropriate grease for the job is a case of narrowing down your choices, this can be done by choosing a grease which is going to perform best for your specific application. There are a lot of different applications and a lot of different greases to choose from but the two most popular greases on the market today are Lithium Complex EP2 and Calcium Sulfonate.

Making the right decision isn’t easy but you need to look at what you want the grease to do. Does the application require the grease to have high water resistance? Or does it have to cope with High temperatures? Or even food safe applications? If you were to compare the two most popular greases (Lithium complex and Calcium sulfonate) the calcium grease will usually out perform the lithium complex in the drop point test due to the properties of their soap complex. Regular lithium grease tends to drop around 350F (176.67°C). Lithium Complex drops at 500F (260°C) and Calcium Sulfonate grease approaches 600F(315.56°C) the extra 100 degrees in temperature for the calcium grease means it has an extra 100 degree of operating temperature range which can be an advantage for the equipment and environment it is being used in.

When looking at a technical data sheet of a grease, you might see a reference to Worked Penetration at intervals of 10,000 and 100,000 strokes. These tests are carried out to document Shear Stability. Shear stability is one of the essential characteristics of any grease. Grease has to maintain its consistency under high shear conditions over a long period of time to be most effective.

So, the ASTM D217 test is used to document how the grease’s thickness may change over time. A sample of the grease is put in a machine and worked for 60 strokes, then 10,000 strokes, then 100,000 strokes. They then test the thickness of the grease at each point to see how it has changed. If the change in number is smaller than the more shear stability the grease has. A more stable grease thins out less over time exposed to long-term stress, and that's what we should be aiming for.

Most lithium complex greases will have a typical score on this test to be around 30. A Grade 2 grease, may have started with a thickness score of, 280 (putting it in the middle of the range for a Grade 2 grease). After 100,000 strokes, the score may have changed to 310 (an increase of 30), which is just barely at the beginning range for Grade 1. So the grease changed from a mid-Grade 2 to a thick Grade 1. That's acceptable, if not ideal.

For calcium sulfonate grease, it is not uncommon for their scores to change by less than 20 units. That 280 Grade 2 grease may only change to a score of 295 or 300 instead of 310. Calcium sulfonate greases exhibit greater shear stability than lithium complex greases. And that means they will hold up under pressure, for longer, than lithium greases.

At LRT Lubricants we have a wide range of greases available and the knowledge to help you find the right grease for your application.

Click here to view just some of the options we have available.